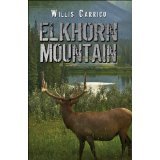 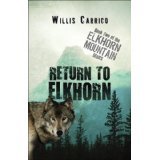 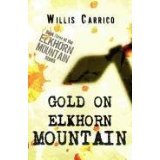 Frontier Western Books By: Willis Carrico  $15.00 each and hand signed.

Book 1- Elkhorn Mountain-Thomas Bach climbed the cobblestone stairs leading to the main part of the jail. The dim light from the street lamps followed Thomas, as the stairs wrapped around the building. This walkway led him to a large wooden door with solid steel plate hinges. Thomas had worked for the Montana Star newspaper for nine years and this was his first really big assignment. His task was to interview the man whom they would hang at dawn’s first light for murdering four men and two women on Elkhorn Mountain. Thomas traces the path of the murderer, “Regan Wright,” in his interview, but something about Regan's story seemed amiss. It felt like Regan was telling the truth when he spoke of who really killed those people. Thomas left the newspaper and followed Regan's story and what he finds is adventure, lifelong friendship, treasure and most of all, a new wonderful life.

Book 2- Return To Elkhorn-Smoke plumed from the rooftops of Chester. A heavy snow had blanketed the town in the night. It was Thanksgiving Day, 1886 and the sun started to break the horizon, warming the town with its orange glow. The town was just starting to stir, but darkness would soon come to Chester, a darkness that would spread through the town: greed, lust and murder would take its toll. This small town in Montana was in for some big changes, changes that would set an example for the growing of the wild frontier of America.